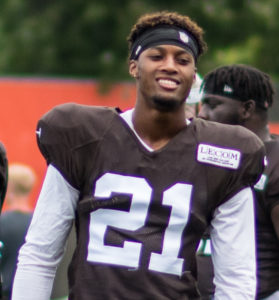 Well, to be completely accurate, he started by reaching out to Ward’s mother, Nicole, to see if she would contact Denzel on his behalf. Steve has been close to the Ward family since he and Nicole’s late husband Paul Ward worked together at PEP in the late 1980s. Throughout their careers, Steve was a mentor and friend to Paul. They spoke regularly, strategized about administration issues together and enjoyed lunch as often as possible. Steve has remained close to the family, even after Paul passed away a few years ago.

When he spoke to Nicole, Steve asked if Denzel had any contacts in the NFL who might be willing to provide turkeys to all his students for Thanksgiving.

“I knew in my mind as soon as he asked, Denzel would be the one to do it,” said Nicole. And she was right. As soon as she mentioned it, Denzel immediately said he wanted to take care of it through the foundation he created to honor his father, Make Them Know Your Name. The phrase was one his father used to say to Denzel as he would take the field as a young player. Today, the words take on even more significance as they expand beyond Denzel’s impressive skill on the field to his impact on the community.

PEP is grateful to Denzel Ward, his family, and the generous gift from his foundation. We’re grateful for our relationships and how they shape who we are and the compassion we show throughout our lifetime, just as Paul’s generous spirit lit the way for his son. This year — even though its challenges have been unrelenting — won’t go by without a Thanksgiving meal for our PEP Eastwood families.

Thank you, Denzel, Nicole and Paul. Even if we didn’t before, today, we know your names.