An NMT Transformation: From Chaos and Upheaval to Hugs and Smiles

“ARE YOU SURE YOU’RE GOING TO BE ABLE TO HANDLE HIM?” HIS FOSTER MOM ASKED ME. “HE CAN BE A LOT.” 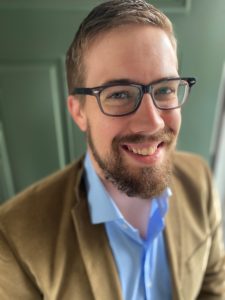 “Are you sure you’re going to be able to handle him?” his foster mom asked me. “He can be a lot.”

I had heard these words many times before while completing an intake interview and felt confident reassuring this concerned parent that we would be fine. After all, this is what we do. Kids often come to Positive Education Program having suffered many kinds of trauma and with countless barriers to learning, and we try our best every day to meet them where they are to help them learn and grow.

Seven-year-old Marquis* was no different. Having been born addicted to drugs and placed in foster care before the age of 6, he had seen a lifetime’s share of hardships already. I looked this parent straight in the eye and told her she didn’t have to worry.

Imagine my surprise, then, when Marquis turned out to be more than we bargained for. Multiple instances of aggression toward staff each day, a broken window, near-constant disruptions to the classroom, and threat of running from the classroom (or the building) without notice at any time were just some of the ways he was keeping things in a constant state of chaos and upheaval.

To make matters worse, most of the classic, tried-and-true interventions were not working. We gave him choices, offered incentives using a sticker chart, practiced planned ignoring and active listening and Marquis was still struggling to just get through each day on a regular basis. 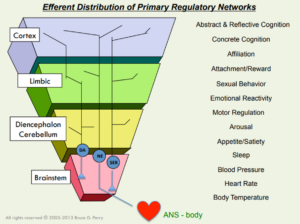 Fortunately, at PEP we are trained in the Neurosequential Model of Therapeutics (NMT), which provides us with strategies beyond the traditional interventions when dealing with difficult behaviors. NMT, a program founded by Dr. Bruce Perry, studies the relationship between trauma and specific areas of the brain, and works on rebuilding those areas with targeted interventions to help children heal.

NMT is truly an incredible and rich field of study but is also elegant in its simplicity. Dr. Perry’s research recognizes that the brain forms from the bottom up, and that each area depends largely on the one below it to function effectively. If one of those lower, more foundational areas of the brain becomes altered by a traumatic experience, it can have a domino effect on the functioning of the higher, more complex areas as a result. (See figure left. Credit: Child Trauma Academy, Introduction to the NMT.)

Even better, NMT highlights targeted interventions to help rebuild and repair these maladaptive areas so kids can begin to function more effectively. In Marquis’ case, he wasn’t acting out because he was bad, or because he wanted to give us a run for our money, but rather because he didn’t have any other tools in his toolbelt to help him deal with the emotions that overwhelmed him nearly every moment of every day.

A brief rundown of some of the trauma Marquis had already endured told us that we needed some very basic interventions in place to help him just get through the day. We focused on two things – interpersonal connection to target the limbic system and sensory intervention through physical touch to target the midbrain.

We made it a point to meet Marquis the moment he got off the bus and invited him to take a walk with a trusted adult through the hallways. He could walk for as long or as short as he needed, and we encouraged him to greet those we passed with a wave or a hug. Periodically, we’d ask him if he was ready to join the group and start his day, but we always let him make that choice when he was ready.

To target his need for physical touch and sensory input, the hugs in the hallway were crucial. We also made a point to constantly address his sensory needs by peppering in shoulder squeezes, hand massages, trips to the sensory room, and gentle back patting at least once every 15 minutes. We once again made it a point to always let Marquis be in control of those sensory inputs, as we’d ask before engaging him, often giving him a choice between which he’d prefer. This helped give him a sense of control and autonomy over his needs and let us gauge how close he was at any moment to reaching the threshold where he might feel the need to act out again.

An Astounding Transformation through NMT

His response was astounding. Marquis began to show changes in behavior quite literally the moment we first began these interventions. The first day, getting off the bus, it was easy to see Marquis was already ready to slip into his established patterns of disruption. He braced his body to run out of the school when we asked him if he was ready to enter the classroom. Instead, we offered the walk and a hug. He declined the hug initially, but cautiously agreed to the walk. Within 5 minutes, he had hugged a dozen people in the hallway and was smiling ear to ear.

We continued this intervention throughout the day and into the next few days and weeks. Even to trained professionals, the immediacy of the change was surprising. Marquis’ aggressive behavior all but subsided, and within a week or two, he was reaching out to peers to play together at break times.

At PEP, the change we believe all our kids can make is at the heart of what we do. We also recognize that change often takes time, and we learn to notice and celebrate small changes and incremental growth as part of a larger process toward long-term success. That’s why it was so breathtaking to see such a drastic change in such a small amount of time.

NMT as a Framework at PEP

NMT gave us the framework to begin to recognize some of Marquis’ behaviors as a response to trauma and it also gave us the tools to be able to address those needs. And while we can’t always be assured that these targeted interventions will work as swiftly and effectively as they did for Marquis, we can be confident that growth can happen. NMT gives us the tools to help kids heal from trauma and gain hope that a new way of living is possible.

So, the next time a concerned parent warns me that their child may present some challenges, I can still look them straight in the eye and tell them yes, we can help.

*Not his real name